Global Retail Banks – The Demise of the Mainframe or vice versa? 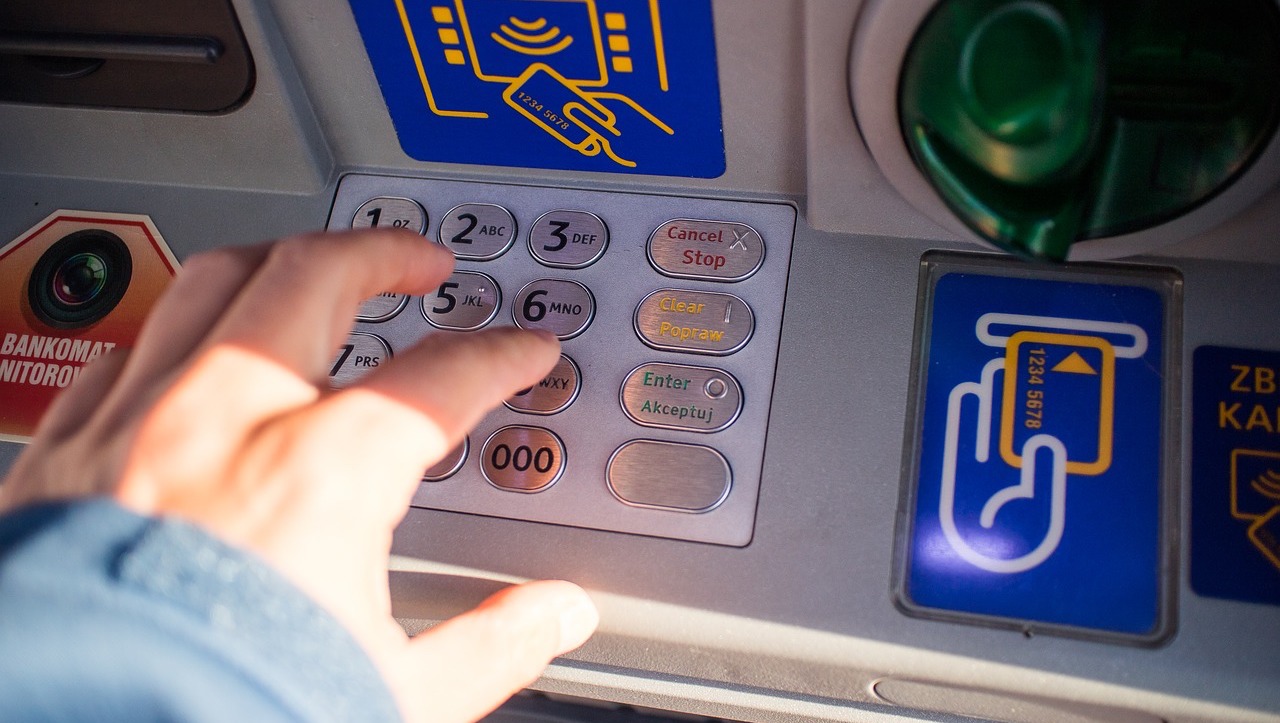 The world of banking has been dominated by mainframe infrastructure for decades. However, one would be hard-pressed to find any bank or financial institution that has been created in the last 10-15 years that was built on this platform. Does this mean that mainframes are bad? No. Does it mean that mainframes are REQUIRED to delivery banking services today? No. Does it mean that the overused phrase that “70% of the world’s financial transactions run on a mainframe” means that you can’t run a bank without one? No.  All it means is that the traditional banking industry, one of the earliest sectors to embrace computing, built their systems on this platform and have been reluctant to spend money to change. The real question is would they do it all over again if they were starting now? Probably not, given that no financial institution HAS over the last decade!

During my 18 year tenure at Gartner, I was shocked to find that banks feared that the younger generations, the source of their new client base, don’t LIKE banks! Younger generations used all kinds of alternatives to run their financial life (such as it is) and didn’t see the real value of traditional banks. Mobile banking is KING! Why on earth would any self-respecting millennial go into a branch of their bank unless they were forced to by the Paleolithic processes of that institution? The answer is that they wouldn’t, except today they HAVE TO! In fact, in many geographies, it’s harder to find a branch office in any case, which makes loyalty even less likely! Banks, faced with changing demands related to the demographic shifts of their consumers, have been closing these bricks and mortar environments for some time. But here’s the weird thing. Banks that close their bricks and mortar branches risk defection. According to a study by Bain & Co. in 2016, about 40% of customers who experienced a branch closure took their business to other banks. 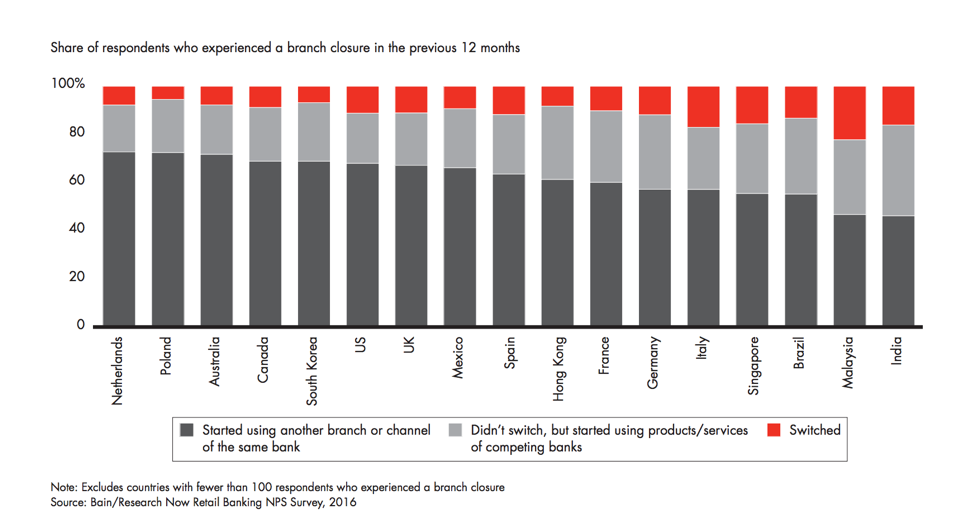 “Given that many consumers still use a branch—60% of UK respondents visited one during the previous quarter—it would be dangerous to make large cuts to the brick-and-mortar network until customers find it easy to handle routine transactions through self-service digital channels.”

So, banks that cut their branch services while continuing to preserve their old-fashioned bank processes, built on mainframe applications developed decades ago are at great risk! We could certainly debate the correct mix of branches and services they provide, OR we could move to environments where “….customers find it easy to handle routine transactions through self-service digital channels”. And that “environment” is less and less likely to be the mainframe and less likely to be through a bricks and mortar branch office. According to this same Bain report, younger bank clients can create up to TWICE the number of banking transactions as older generations. How is it an advantage for a bank if its mainframe processing DOUBLES because younger customers are creating so many “zero value” interactions with these systems?

And here’s a SECOND weird thing – banking used to be about the knowledge and relationship that local banking staff had with their clients. With the growth of mobile banking and the disinclination of millennials to actually SPEAK to people, this key factor has changed. Between the dramatic growth of email, smart phones, texting, the web and social media, why would they want to actually speak to a real person? So banks must strike a balance between their provision of services in-branch versus digital products if they are to keep their customers happy.

Banking services in the strangest places!

But this is not the only challenge that traditional banks face. They also face competition from places that no one would have ever imagined would provide financial services. The major GAFA technology players (Google, Amazon, Facebook and Apple) are changing the nature of financial transactions. The early focus has been on payments for purchases. When GAFA gets hold of all your social information as well as your purchasing decisions, they have a level of information about you that traditional banks cannot collect at such scale. We may debate whether this is more or less safe than traditional banking, but online purchasing continues to grow at scale nonetheless. I know, I know, you’re going to tell me “Yeah, but there is a mainframe SOMEWHERE behind all those transactions”. Well, for now, yes. (Let’s leave BitCoin out of the conversation for now!) Mainframes are processing the LEAST VALUABLE part of the banking relationship with its clients. For banks to simply be a holding pen for money while it’s being spent and used in a wide variety of ways is a losing proposition. Banks need to delight you as a customer enough for you to take out a loan from them! THAT’s where the money is! If a millennial’s “relationship” with GAFA is greater than their bank, then they’re going to look for loans in a wide variety of places, and the bank they use to “hold their” money won’t be one of these! 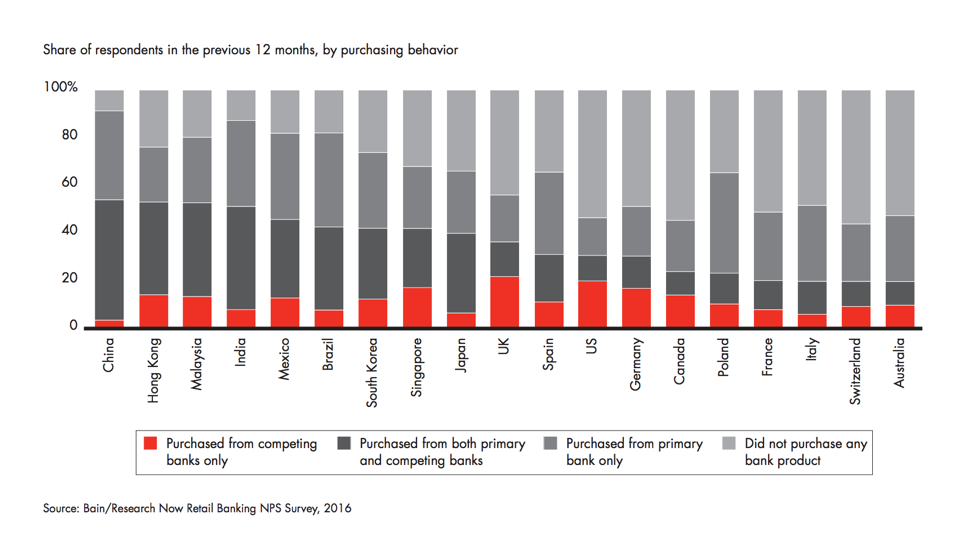 The Hits Just Keep on Coming!

On October 8, 2015, the European Parliament adopted the European Commission’s proposal for the revised Directive on Payment Services (PSD2). On January 13, 2018, member states were required to have implemented PSD2 into their national regulations. The main aim of the legislation is to create a level playing field for all payment service providers, including modern fintech providers and traditional banks, but these provisions will present a number of challenges to traditional finance providers:

Large traditional banks will therefore face an inflection point when the Payments and Services Directive 2 officially comes into force. Fintech challengers will be able to embrace and capitalize on this legislation rapidly, as they are not hampered by being locked into legacy banking systems and processes dependent on mainframe applications; which are notoriously averse to integration with modern technologies. The last few years have seen an explosion of up and coming challenger banks and Fintech innovators, who are able to offer consumers some of the best and most flexible customer services built on modern cloud-compatible systems. The consequences for traditional banks of a failure to modernize legacy systems is nothing short of existential, and potential catastrophic.

What’s a Bank to DO?

Modern banking regulations and the changing expectations of consumers due to the demographic shift of the global population are undeniable. It is not a good plan to count on this as just a passing fad. Hope is NOT a strategy! Begin the process of moving existing workloads to the cloud and take advantage of the innovation of the open source community. Even if you prefer private cloud architectures, begin the process anyway. Moving legacy banking processes to distributed platforms in a way that opens up the data to be used to better understand banking clients, like the GAFA technology leaders do, is a good start. Reduce spending on proprietary, legacy platforms and use the savings to fund the real investment needed to meet modern banking demands. Think of the competition as GAFA and NOT the other traditional banks down the street. Outlasting your competitor is small solace if you are the next bank to fail! Mainframes have been a great platform for the last 50 years. Do you expect them to be the only platform able to provide modern banking solutions for the NEXT 50 years? Begin the transition now, unless your retirement plans are of greater importance to you!